No one asked me to do this, but I think it’s a public service that needs to be performed so I’ve taken it on.

I’m a cell phone Luddite – there, I said it – and see no reason to be connected to the internet at all times, or tracked by governmental entities through the GPS function in cell phones. Call me paranoid if you like, but I’m not about to trade privacy for convenience. Of course, for all I know they’re surreptitiously installing GPS in new cars these days, so it might be that I’m only kidding myself. Who the hell knows anymore?

But what I thought would be useful to me, and others, as the “fit hits the shan” dystopia-wise, is a list or map or some kind of easily consulted reference of all the pay phones in the Greater Columbus area, where I happen to live. This started a couple of years ago, and at first my wife is like, “You’re out of your mind. Nobody uses pay phones anymore.”

She’s basically right about that. But nobody uses pay phones anymore not because they object to them in some fashion – cost, sanitation, whatever – but because they can’t find one.

Used to be you could stroll down any city street and pass a phone booth every couple of blocks. A phone booth. An actual structure that you closed yourself into, out of the cold and the rain, to make your phone call, and there were a couple of phone books in there too, in durable plastic or even metal covers, attached to the booth by some kind of chain or cable. White and Yellow Pages. You could look up anything or anyone and call them for just a dime. Later a quarter. Who the hell knows what a pay phone costs now?

I do. At least in the Greater Columbus area.

Obviously my first task was to locate all the pay phones in my hometown – the Greater Columbus area – and to my chagrin this was not an easy task. As you can see from the map below, there are only four, and two of them are in the same location. One is behind the security area at the airport, near gate B33, so unless you’re flying Air Canada, Frontier, American, or United, you won’t have a chance to use that one. This is poor planning. 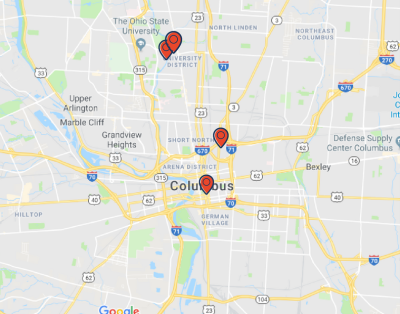 Two phones are at a Kenny Road FedEx Office store. Why? The fourth is at a cineplex near Ohio State. No student at Ohio State who happens to be at a goddamn Spiderman sequel is going to want to use a pay phone. This is a waste of a perfectly good pay phone.

Obviously, I had to hit the road, and when I announce my intentions, my wife – Amber – tells me this is probably the penultimate straw. “I’m not exactly ready to divorce you, but we’re getting fucking close, Scott.” And I don’t know why this is getting to her so bad, but I’ll admit that our marriage hasn’t been exactly Shangri-La the last few years. She has her quirks too, you know. A little OCD issue with hand-washing and having all her clothes face the same direction in the closet. This is not normal. Which I remind her before I throw a bag into the car and head for Cincinnati.

Cincinnati, it turns out, is a joke as far as pay phones go. Look at this map. Ridiculous. It’s on to Dayton. 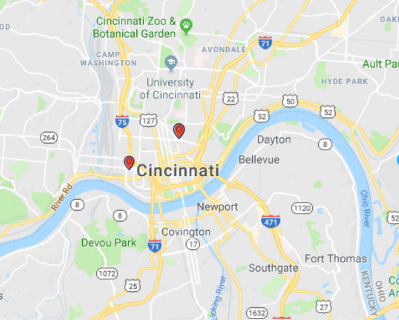 Dayton’s an improvement over Cincinnati, with eleven pay phones, but when you do a deep dive you realize that eight of them – eight! – are in the same frickin’ place – a Holiday Inn lobby. This is suburbia, not a good location. Out there amid the self-storage facilities and the light industrial services. Your story is pretty tragic if this is where you finally stumble after walking a half-marathon from your disabled car in search of a pay phone.

For the three other Dayton phones, I’m not even bothering to show you a map.

I head over toward Cambridge on I-70, where I can’t call Amber from because – you guessed it – no pay phones in Cambridge. (Nor in Zanesville on the way. I checked.) But I decide to spend the night in Cambridge so I call Amber from the motel. She informs me that it turns out this is the last straw and she will be leaving me when I get back. “If you get back,” she says.

It’s utterly crushing that Canton is bankrupt where pay phones are concerned. Not a one that I can locate. I manage to find a couple of old pay phone housings, which are just about the saddest thing you’ll ever want to see, tarnished old stainless-steel wings bolted to a façade, multicolored wires hanging from the back, and empty phone book covers gaping like toothless mouths. It’s shameful.

Akron. What can I say about Akron? There are some pay phones. A handful. Once again, two in the same goddamn place, though, and what are the odds that both would ever be in use at the same time? Think, people! Think! Anyway, here they are, if you’re ever in Akron and in need of a pay phone: 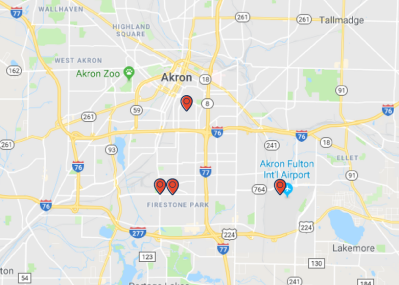 My last, best hope is Cleveland, and if my disappointing experience so far is any indication it will let me down like all the other cities and towns in my laughable state. I have half a mind to move to Pennsylvania.

I pull into a gas station south of the city. Don’t see a pay phone. The clerk looks at me with suspicion, since I don’t appear to be buying any beef jerky or cheap sunglasses, and when I ask if he knows where any pay phones are he just nods. As if to say, Here we go again. And I get it, he’s tired of telling people there are no fucking pay phones anymore, what is wrong with you? He’s had it. He’s probably already gone through six iPhones himself.

Instead: “Pay phone? There’s one in just about any building you go into around here. We just took ours out to keep the riffraff from hanging around.”

“You don’t say. Just about any building?”

“Take my word for it. I hope you got plenty of quarters, man.”

I start the hunt. I head downtown, and, by God, the guy is right. I’m finding pay phones almost everywhere I look. I note their locations for my reference guide. On one lonesome corner there’s even an actual phone booth.

All in all, over four days of bliss, I find and document over 350 pay phones in the Greater Cleveland area, which now makes the Greater Columbus area look like frickin’ Hooterville. If I could even approximate a map showing all the pay phones in Cleveland, it would look something like this (each marker representing multiple phones!):

This is probably more accurate: 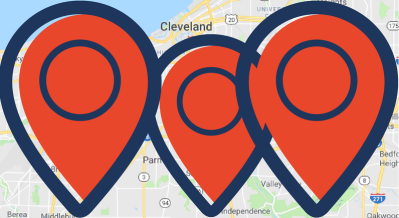 Maybe it comes as no surprise that when I get back to Columbus, I discover that Amber has vacated the premises. She’s taken her cell phone with her, of course, and torn the land line out of the wall. There’s a note on the kitchen counter saying, “You are a cadaver in my mind,” which seems a bit harsh, at the end of the day.

Now begins the hard work of putting Scott’s Guide to Ohio Pay Phones online somehow. So people can locate a pay phone when they really need one.

[Maps via Google Maps and reproduced according to Google’s “fair use” policy.]